The Government released regulations at the end of last week that outline the requirement for product manufacturers to pass through to their clients the benefits of any previously grandfathered conflicted remuneration remaining in contracts after 1 January 2021. 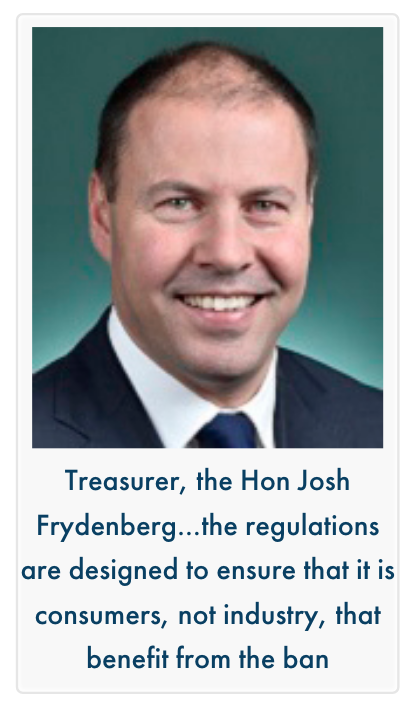 The release of these regulations follows the earlier release by the Government of its exposure draft legislation to ban grandfathering of conflicted remuneration from that date.

Treasurer, Josh Frydenberg, noted the regulations “…are designed to ensure that it is consumers, not industry, that benefit from the ban.

The Treasurer also commented on the Federal Opposition’s proposed legislation to end the grandfathering of commissions, which he said was found to be defective in multiple respects: “Their legislation contained loopholes that would allow grandfathered remuneration to be retained by product manufacturers and not be passed on for the benefit of consumers,” said the Treasurer.

Prior to the release of the regulations, the AFA made a submission to the Government in response to its release of the exposure draft of the legislation.

Click here to access the AFA’s full submission on this sometimes complex issue, in which the Association put forward the following recommendations:

Commenting further to Riskinfo, the AFA has noted that the processes involved in putting a stop to grandfathered commissions involve huge complexity and the existence of legacy arrangements that are either impossible to unwind, or where clients may actually be better off as they are.

It says a considered approach is essential and that “…a one size fits all ban in a short period of time, whilst we are sure is intended to benefit the client, may actually result in an outcome that is more complex and potentially more costly to many clients.”

This is why the Association advocates “…a three year transition period along with common sense exceptions and client opt-in,” which it says could deliver a far more client friendly outcome that is substantially more efficient and commercially sound. Riskinfo understands the opt-in approach to continuing grandfathered commissions for investment and superannuation instruments for engaged clients is a logical solution being proposed by many advice businesses, such as Gold Coast firm, Robina Financial Solutions.

Robina’s CEO, Paul Forbes, told Riskinfo that, rather than introducing new and potentially complicated legislation to address the grandfathering commission issue, the Government should simply extend the existing FoFA Opt-in legislation to include grandfathered commissions, which would then place the obligation back onto the adviser to either ensure the client is actively engaged in the advice process or remove them from their business and rebate any commissions. 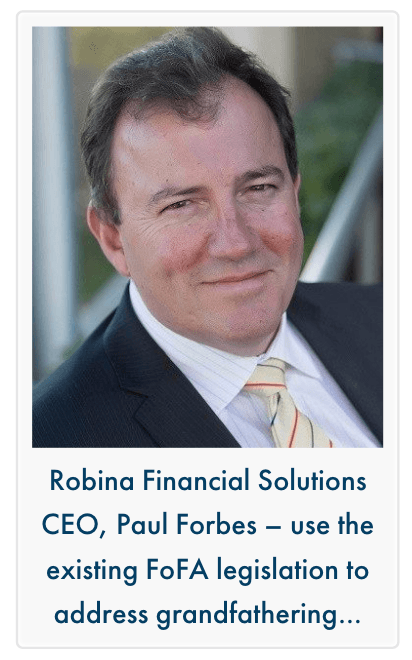 The move by the Government to formally end grandfathered investment and superannuation commissions responds to the Banking Royal Commission’s recommendation 2.4, which states:

“Grandfathering provisions for conflicted remuneration should be repealed as soon as is reasonably practicable.”